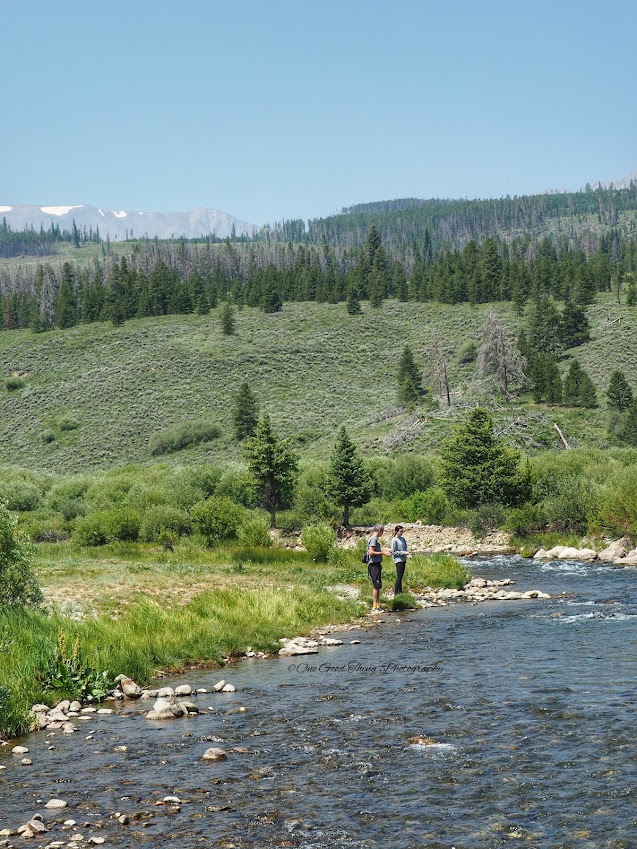 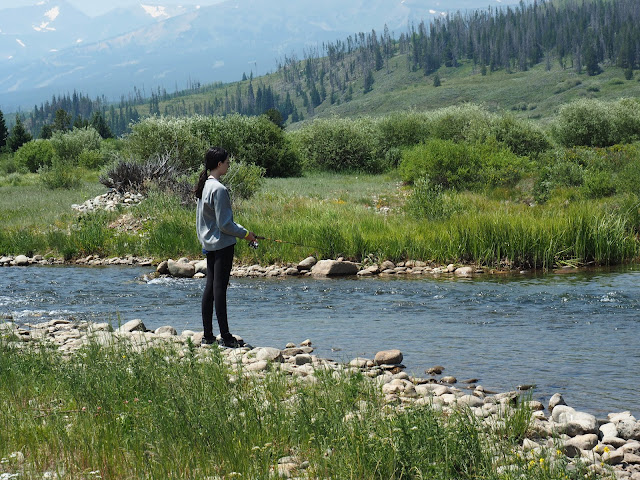 This will be my last stone for July. The latter part of the month is filled with too many family/friend obligations to spend time on the computer. Air quality was better this morning, but the smoke index is up again this afternoon. These photos were taken last weekend along the Blue River where our son and granddaughter spent a couple hours fishing. They catch and release but didn't even have a nibble, so I don't think I'll depend on them to provide dinner.
Wherever you are in the world, I hope you're safe and enjoying time with people you love.
Thank you for your visits.
small stone
(comments closed)
Posted by Barb at 2:50 PM 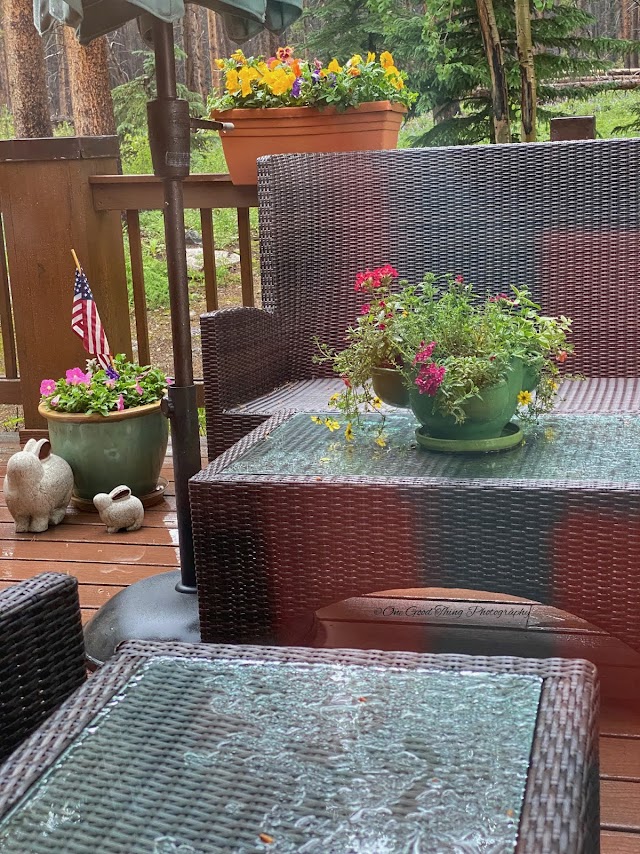 a storm with drenching rain
washes the sky for hours 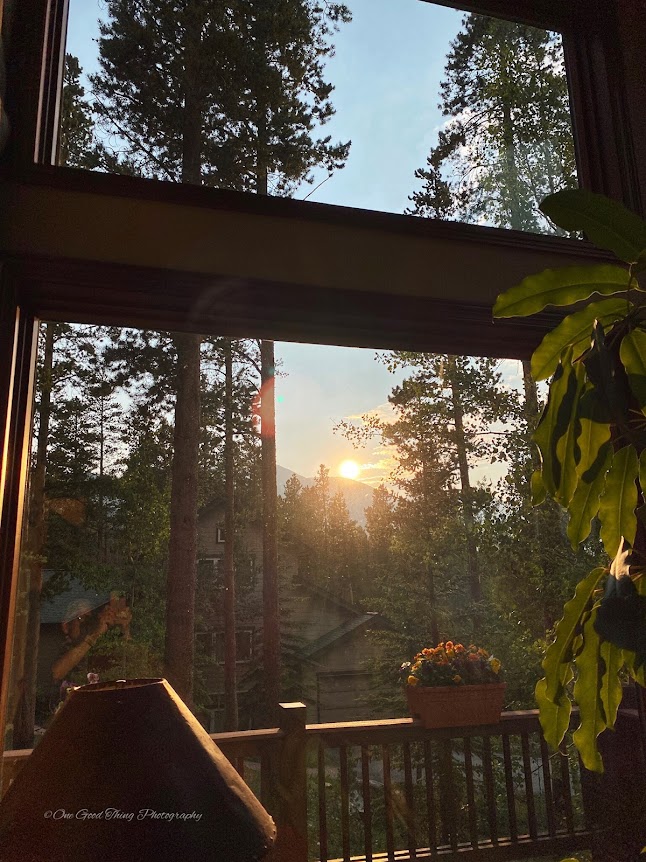 but when the sun begins to set
the smoky haze remains
inside looking out
I'm getting cabin fever
small stone
(comments closed)
Posted by Barb at 9:12 AM

Our normally bright blue sky is hazed by smoke.

In town, I wear a mask so I won't breath too much smoke on the way to the dentist.
My eyes itch and burn from particulates in the air.
The fires are north and west of us, but prevailing winds are bringing smoke into our county.
I'm very allergic to formaldehyde which is in wood smoke.
Fire is a constant threat in dry western states.
I'm housebound until the smoke clears.
small stone
(comments closed)
Posted by Barb at 9:21 AM 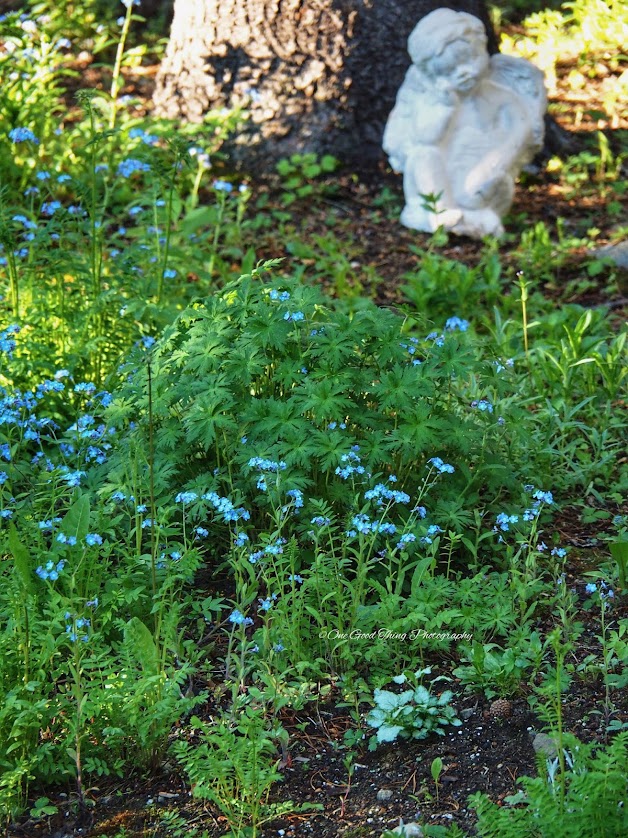 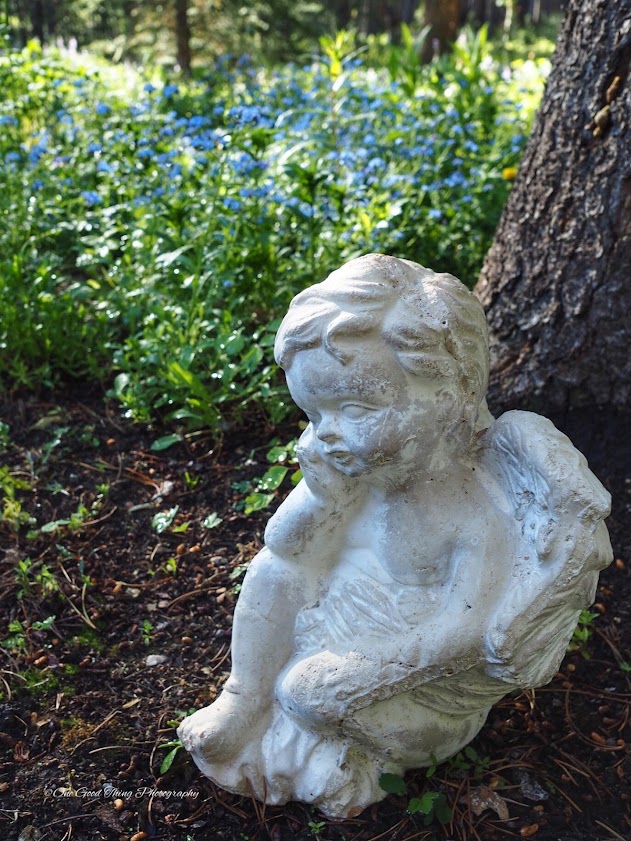 I watch Angelo from my kitchen window
sitting amid the Forget-Me-Nots
always serious, always thinking
staying mindful
small stone
(comments closed)
Posted by Barb at 7:00 AM 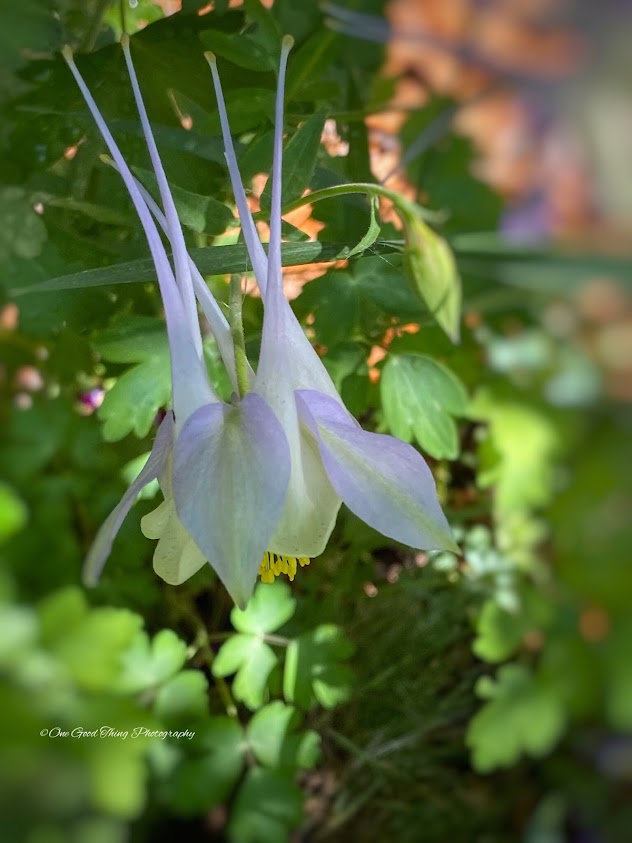 in harsh conditions, the Columbine adapts
to bloom anew every summer
small stone
(comments closed)
Posted by Barb at 8:42 AM 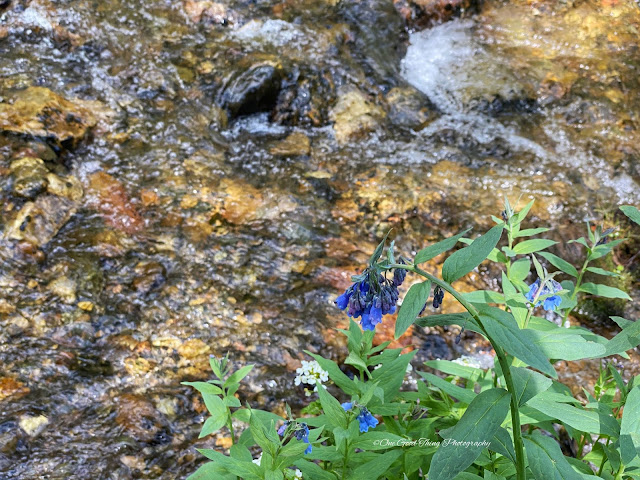 wildflowers sway and bob to the stream's music
I do a little dance, too
small stone
(comments closed)
Posted by Barb at 7:00 AM 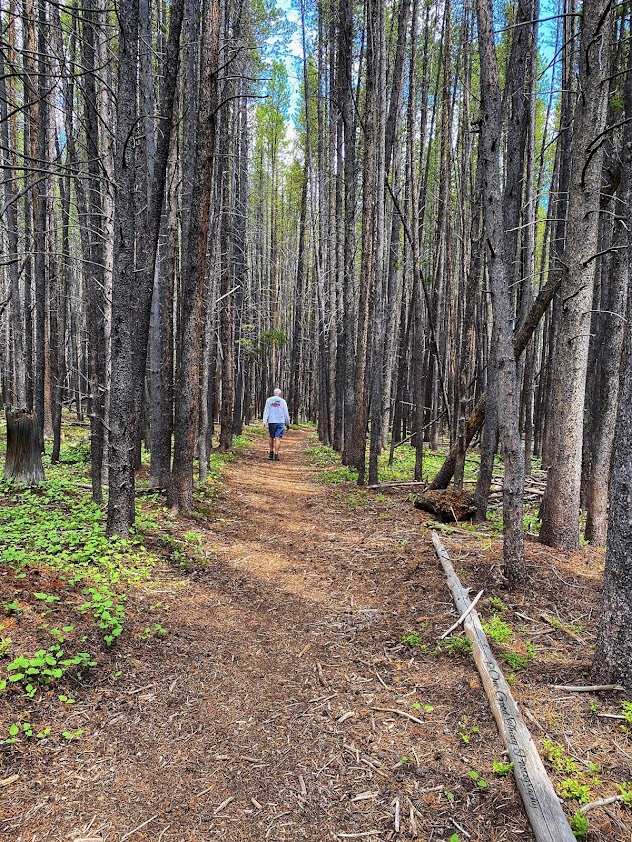 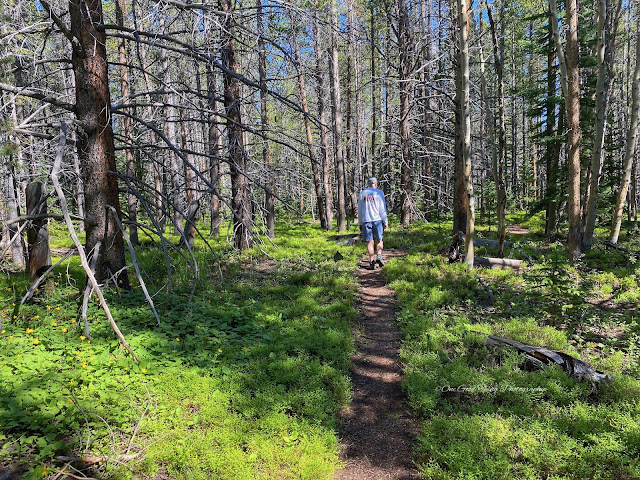 the future is unknown
the path reveals itself
one step at a time
stay present
small stone
(comments closed)
Posted by Barb at 7:00 AM 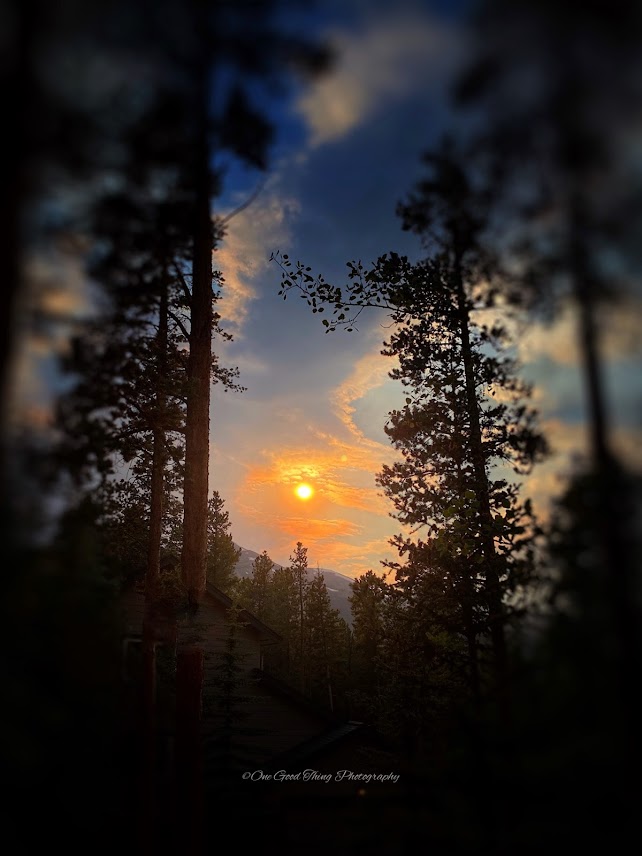 the magic show of twilight
darkness overtaking light
day into night
At 10,000' above sea level there is little artificial light.
Sun, moon, and stars guide the natural world.
The sky heralds beginnings and endings.
I'm reminded that darkness is necessary to appreciate light.
small stone
(comments closed)
Posted by Barb at 7:45 AM 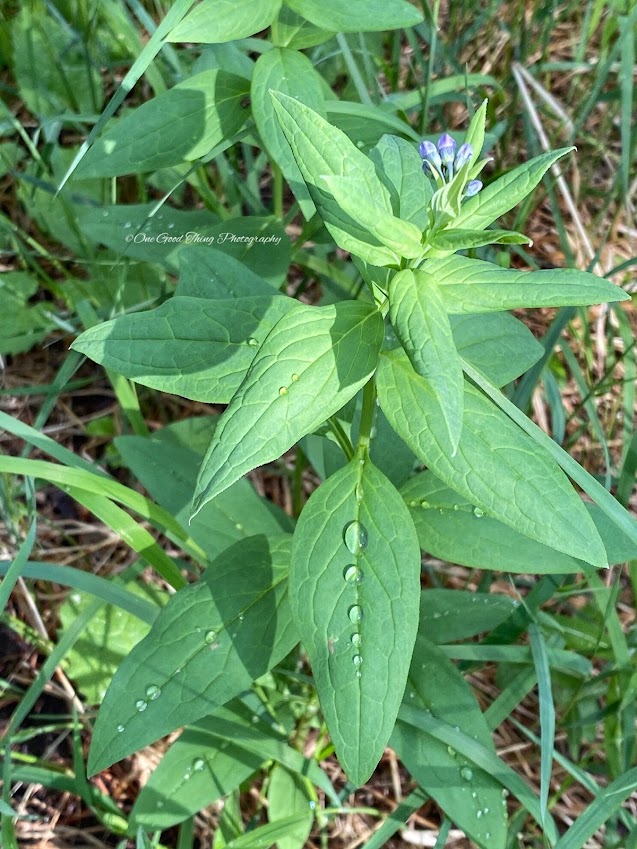 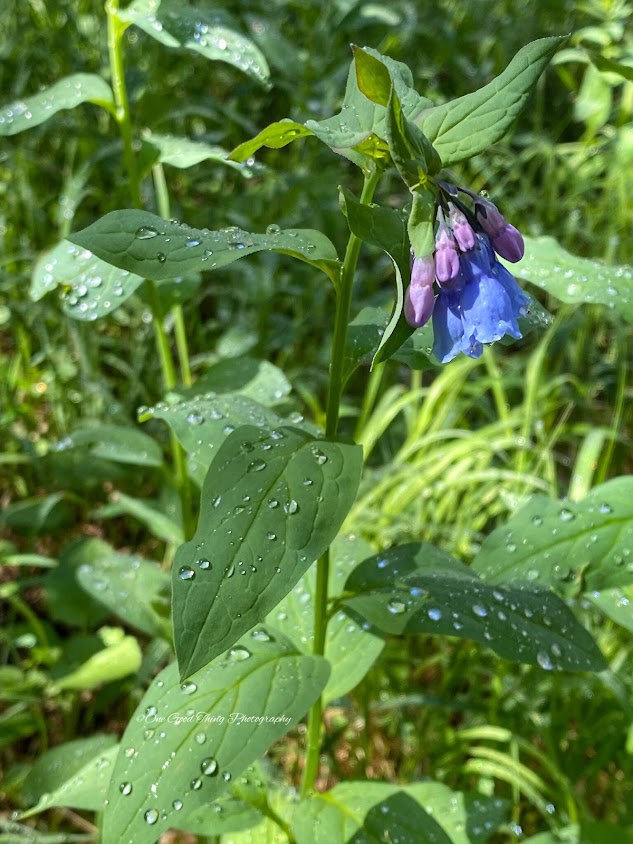 deep in the forest
dripping with raindrops
Chiming Bells toll their summer song
small stone
(comments closed)
Posted by Barb at 7:00 AM

Is There a Silver Lining - Small Stone - 6

I've had a series of upsets over the past couple days. It started on July 4th when a tourist across the street allowed a dog to run loose through the neighborhood. The dog loved whizzing through our gardens and playing in our water feature. I finally went onto the front deck and spoke to the man watching the dog on its path of destruction. I asked him politely to please put the dog on a leash. I told him the dog was destroying the flower beds, and I didn't want it on my property. I mentioned that Breckenridge has a leash law. The man obviously had no control over the dog because calling him only led to frustration. Finally, he swore (either at me or the dog) and walked toward his rental. The dog finally followed.
About 15 minutes later a woman came outside, again with the dog running wild. I went onto the deck and asked politely if she would leash the dog because it was destroying my flower beds. NO she would NOT! She felt the dog had a right to run. I mentioned that Breckenridge has a leash law. She cared not at all. After she called me a "dickwad" and some other choice words, I came inside and called the rental complaint hotline. I had to call them 3 times that day, July 4th, because the dog continued to run. On the morning of July 5th, the dog tried to attack my neighbor who was out early walking her dog (on leash). The neighbor yelled for the woman to control her dog, but the woman obviously had no control. Luckily, my neighbor carries pepper spray and used it to drive the dog off.
My neighbor called the hot line when she got home, and she also contacted me. I called the hotline for the 4th time and was assured that (finally) an officer would be dispatched. By the time the police woman arrived, the people with the dog had left the rental to go home. The officer talked to the people still in the house explaining the leash law. She got the number of the dog owners and was going to also call them. Basically, my neighbor plus Bob and I were just happy to be rid of the threat and the fiasco of these entitled dog owners.
So! Later today I'll do my Loving Kindness Prayer. As usual, I'll think of ways I hope to improve myself and ask for guidance. I'll insert the names of family and friends to whom I want to send lovingkindness. And lastly, I'll include the dog and its owners, asking for lovingkindness to guide them on future encounters (hopefully not with me...).
I try to look for good - for the silver lining.
On some occasions, it's harder than others to find it.
I looked "dickwad" up in the dictionary.
It's a noun meaning a contemptible person; a fool.
I had a feeling it wasn't complimentary!
Sorry this is such a long small stone!
small stone
(comments closed)
Posted by Barb at 7:00 AM 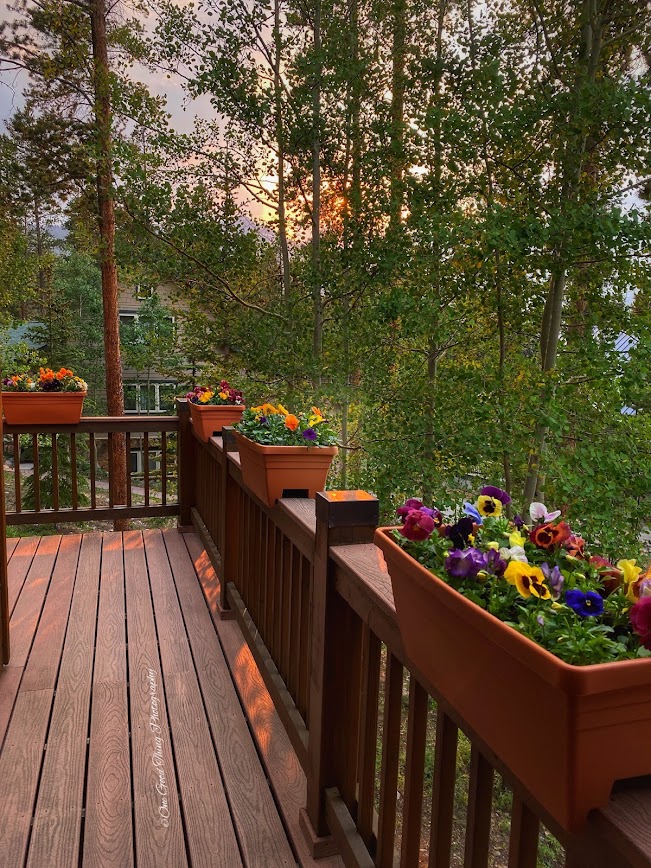 pansies raise their sweet faces toward sunset's glow
thinking of my mother who loved pansies
passing from this life on a July evening
her pansies still blooming
I remember her in the comforting twilight
as tears fall
small stone
(comments closed)
Posted by Barb at 7:00 AM 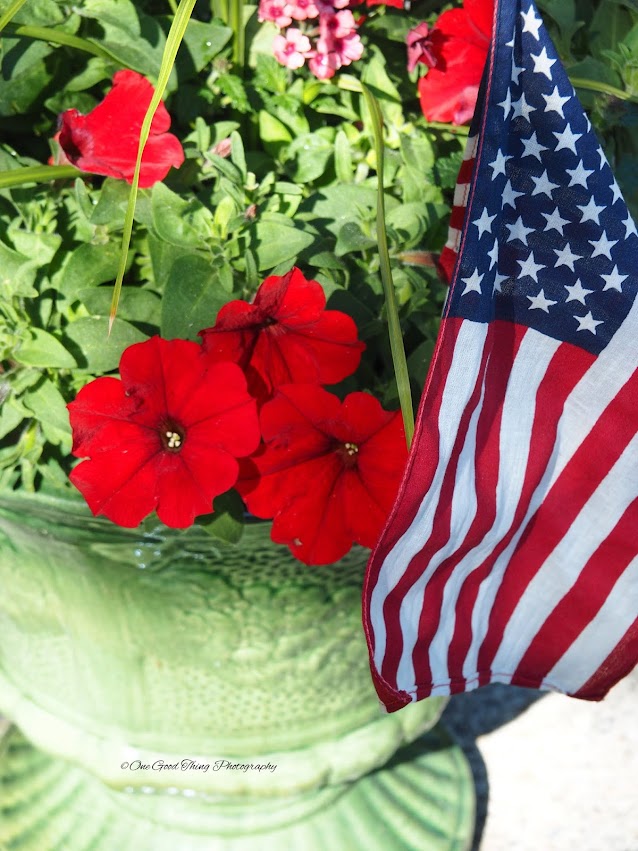 Hiking this morning, I thought about choice. Town is packed with people this Independence Day.
I choose to celebrate in solitude. All of us are individuals - so many differing choices.
Freedom of choice - I appreciate it.
life, liberty, and the pursuit of happiness
don't take it for granted
Happy Birthday America!
small stone
(comments closed)
Posted by Barb at 12:30 PM 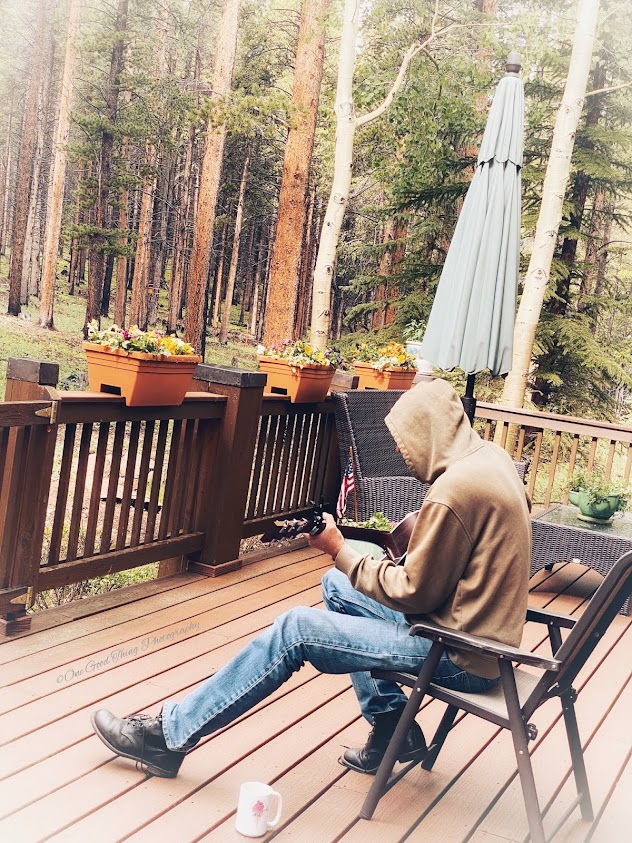 on a cloudy day after rain
strumming on the deck
singing for his supper
songs of love and loss
small stone
(comments closed)
Posted by Barb at 7:00 AM 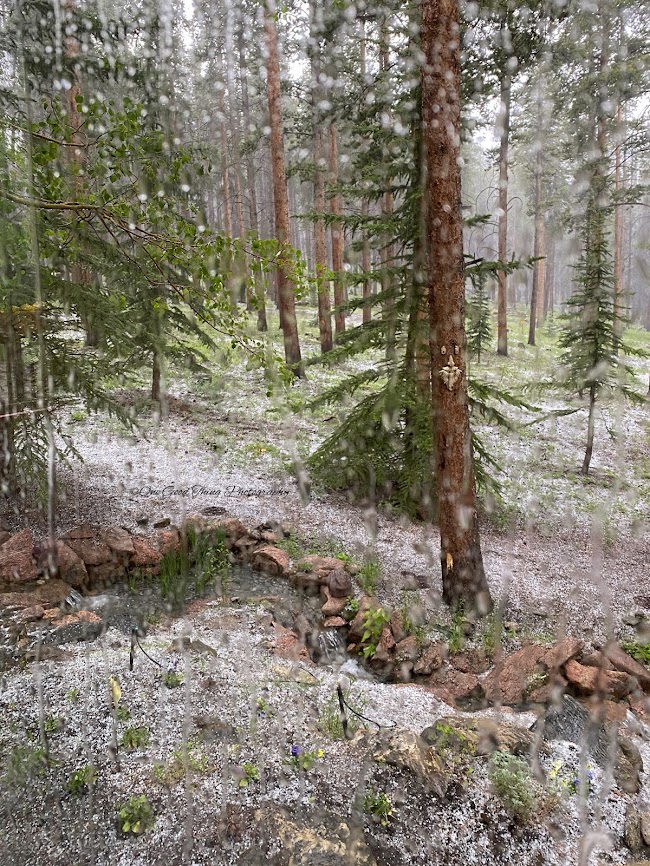 Sometimes, even in summer, storms bring white.
Temperature drops as hail plummets from the sky.
Inside, we light a fire to keep warm.
Outside, Waldo smiles, as usual.
Accept what I can't change - I'm always learning from Waldo.
small stone
(comments closed)

I started this blog in 2011 to participate in an international Small Stone writing challenge. A Small Stone is a brief, mindful observation that may take the form of poetry or journaling. Some of the blog friends I made through the years of writing Stones still use the practice to encourage daily introspection and creativity.
For the month of July, I begin once again writing Small Stones.
As is my practice, I often use a photo along with the stone.
A tree with octopus limbs has been my friend for the past 30 years. It's a landmark in the forest telling me I'm soon home. The state forest service begins a clearcut soon in the National Forest behind my house. The cut is necessary for wildfire prevention. My Octopus tree and most of the old growth trees in the 115 acres targeted are part of the planned cut. 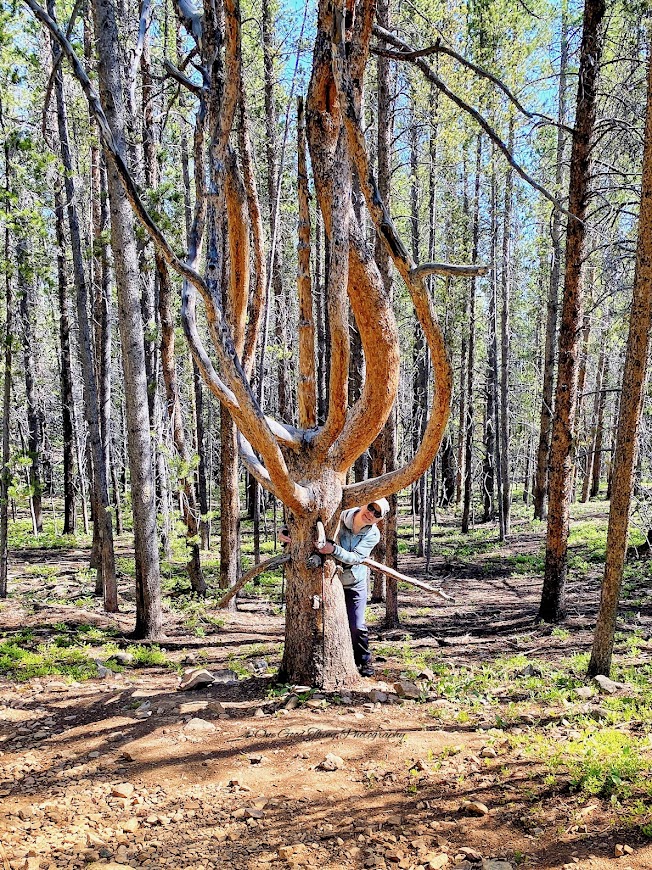 Do you know as I hug you goodbye that your long life of standing sentinel is soon ending?
Will your spirit remain as a guide on the trail?
I'll miss you dear Octopus Tree.
I know you'll remain in my heart.
Thank you for your guidance all these years.
small stone
(comments closed)
Posted by Barb at 1:55 PM