Running Wild - Morning Glories - They Grow on You

Remember the story of Jack and his Beanstalk?
Well, my magic beans are Morning Glory seeds. 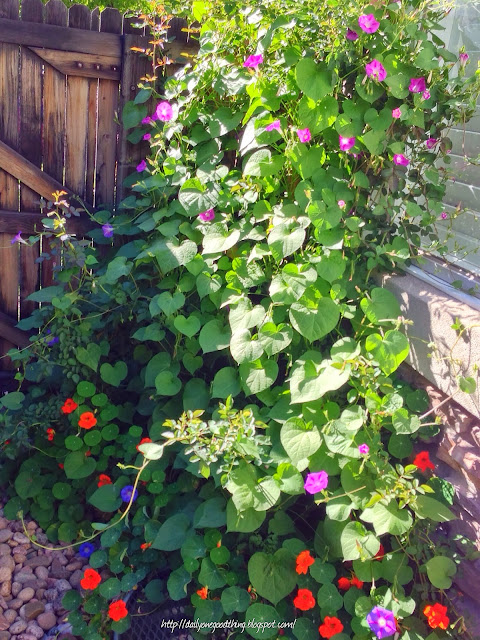 I threw a few in the dirt beside the house in Denver several years ago.
I had no idea they're so prolific.
Each spring, I yank tiny tendrils when they appear.
Every summer, the vines multiply. 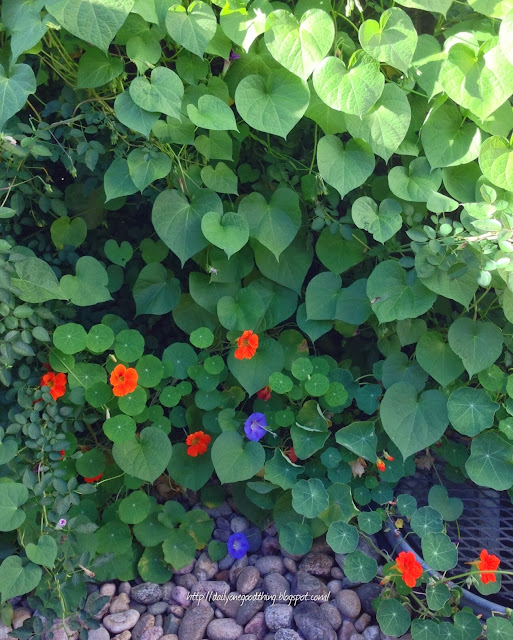 Late this season, they overtook the Nasturtium.
They scaled the climbing rose.
Spiral threads reach toward the roof. 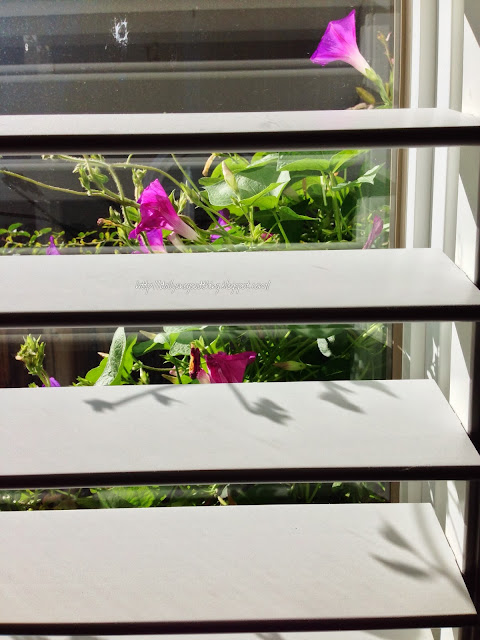 Pink and purple flowers peek jauntily through my windows.
They've turned my narrow side garden into a jungle.
They're uncontainable:

Glories of the Morning

Here's what I've learned:
I'm not going to win this battle.
I'm starting to marvel at their tenacity and perseverance.
I think maybe I'm even enjoying them!
They're starting to grow on me.
Posted by Barb at 7:27 PM 13 comments: 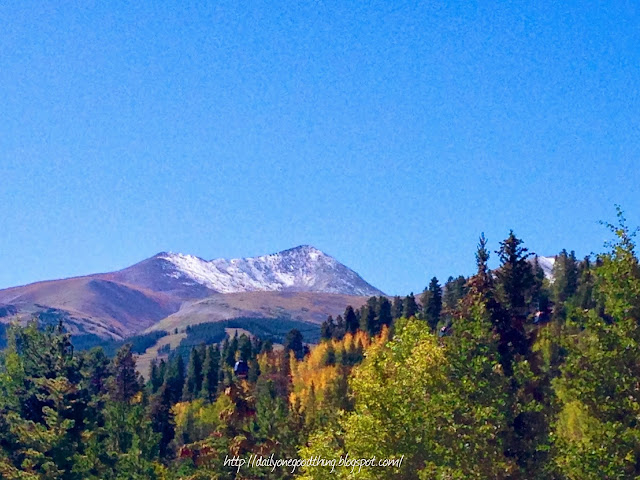 I planned to tell you there was snow on the high peaks this week.
But now this instead:

I left early as is my habit to exercise before breakfast.
I noticed what seemed to be scrapes through the pine needles blanketing the trail.
I examined a few but couldn't decide what had made them.
A bear?
I'd seen bear tracks in the mud earlier in the week.
I became more alert but kept climbing.
My purpose with this exercise is to raise my heart rate.
I bring it up by running and lower it again by walking.
It's a good way to strengthen the heart.

Suddenly, I heard a noise and saw movement above me on the trail.
My adrenalin rising, I realized that it was just a little boy.
I surprised him as he surprised me.
About 7 years old, dressed in a navy blue sweat shirt, he focused on the trail.
I could tell he was wary - what child doesn't know not to trust a stranger?
In a cheery (I hoped) voice, I quietly asked, "How are you this morning?"
As he passed me, eyes still averted, he answered shyly, "Fine."

It was then I noticed someone following him.
Oh - a parent, I thought.
But no.
It was a duplicate little dark-haired boy in blue who may have been 10.
This boy was headed straight for me, pulled by an energetic Lab puppy.
I knelt and held my hands out to the puppy who wriggled a greeting.
"You have a new puppy!" I enthused.
"Yes."
But, I could tell this older child was also frightened of me.
I pointed the puppy's black sausage body down the trail toward the younger child.
His attention diverted, the puppy immediately began pulling big brother down the trail.
I suddenly realized that the scrapes I'd seen earlier
were from the puppy bracing as he lunged on the leash.
I watched the three of them disappear around a curve.

Moving upward again, I expected to come upon their slowpoke parent.
Nobody appeared.
I began to worry.

What were 2 little boys and a puppy doing alone on the trail?
It was early and too far from habitation.
Off the main trail there are many minor trails.
People are constantly getting lost on them.
My house is at the bottom of one of the minor trails.
Adults often appear in my back yard needing directions.

As I kept moving and thinking, I couldn't conceive of parents
allowing these young children to wander this far by themselves on the trail.
I wouldn't trust that my own grandchildren
who have navigated the trails with me for years
could find their way back home alone.
Children of this age have no sense of direction.

I became more and more uneasy.
I began to think of my own childhood.
I was a latchkey kid.
I roamed in what I now realize were remote and dangerous locations.
But, I wouldn't want my grandchildren to take the same chances.
What the heck were these boys doing with a small puppy so far from supervision?

For good measure, I thought of each of my grandchildren, too.
"Be safe."

I never found the children.
I'm sure they ended up back where they started.
Perhaps there was hot cocoa.
Maybe they retold their adventure.
Would they mention a white-haired lady?

I cannot get them out of my mind.
Tonight, I'll watch the news.
I'll hope there is no mention of missing children and a lost puppy.

May the safety of children be my One Good Thing today.
Posted by Barb at 12:37 PM 26 comments: 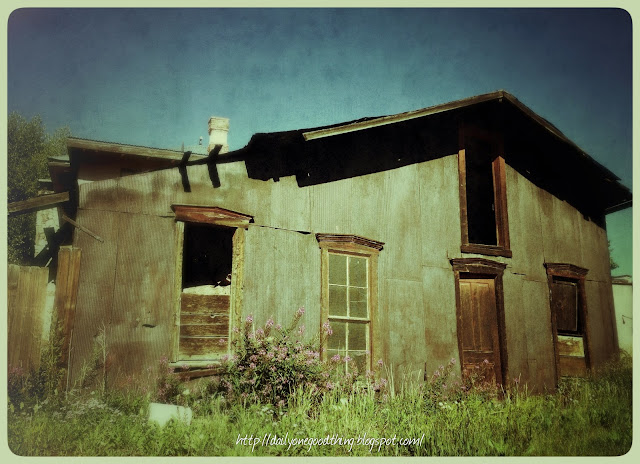 We're having some remodeling done.
Lots of discarding and housecleaning is happening.
My journals covering 20+ years are (were) stored in boxes.
At certain points in my life, I wrote 2 pages a day in black ink on lined notebook paper.
Lots of the pages were written during my 30's, 40's, and beginning 50's.
I've been fluctuating about what to do with those stacks of notebooks.
I spent a bit of time over the past year randomly reading through them.

A few days ago, I spent hours destroying them.

Thoughts of my grandchildren finding them after I'm dead helped me decide.
At first, I fed the handwritten pages slowly into the shredder to determine if I would vacillate.
Hours later, the shredder was jammed and over-heated.
That's when the frenzy started!
I began hand-tearing and scissoring as fast as I could.
Finally - the job was finished!
I felt nothing but relief. 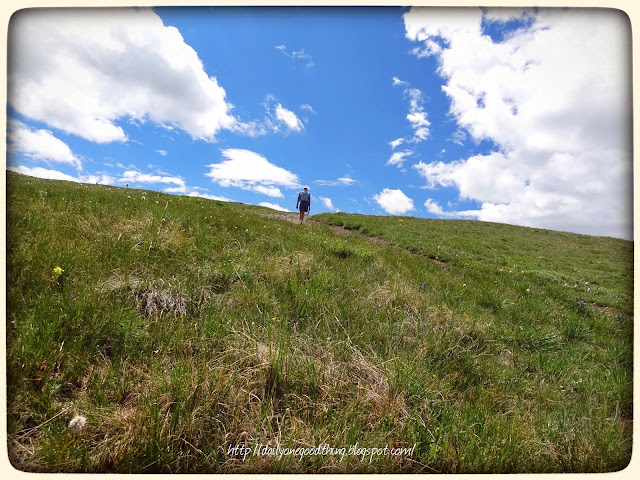 The next morning, when my son called, I mentioned an incident from his childhood
that I'd read during shredding.
His voice got a smile in it - he remembered the scene well - a happy memory.
So, I realized that though the journals are gone,
for those who matter, the memories remain.

how quickly a year has passed 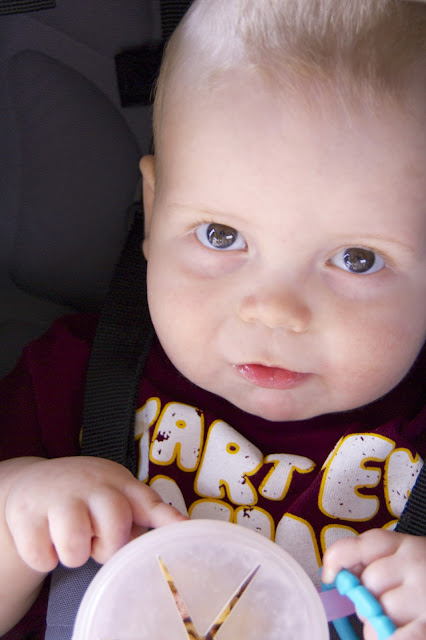 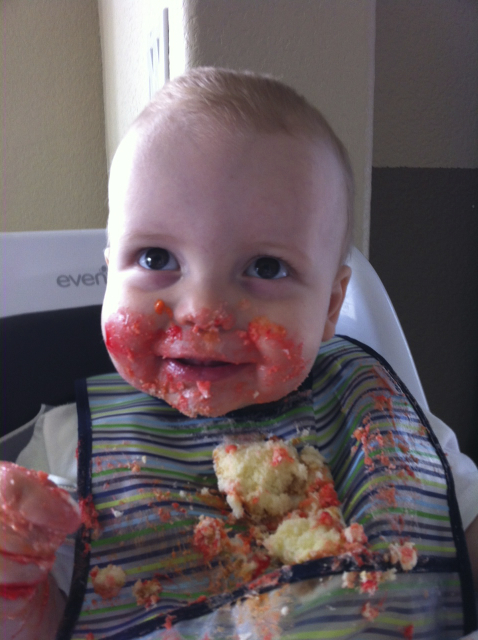 you are always Grammy's One Good Thing
Posted by Barb at 7:57 PM 15 comments:

Barb - Always Clicking
I live at high altitude in Breckenridge, CO. I invite you to join me as I experience and share One Good Thing. Though I'm in my late 70's, I try to stay young at heart, to welcome new experiences, and to keep active by hiking, snowshoeing, skiing, and walking. I'm a quiet soul, a good listener, and a lover of Nature. My husband and I have been married for 55 years. Our Grandchildren are among our greatest joys.