The trails behind my house lead into wilderness. Usually, as I trek well-known routes, I'm alone with my thoughts, only encountering animal tracks or small critters as I move through the forest. Recently, I saw someone in the distance as I steadily climbed upward. He was bent over a full pack, rearranging his gear. He didn't hear me approaching. I called out to him when I was quite close so he wouldn't be startled. As he turned to face me, I took in his appearance - old-fashioned wool pants sharply creased, stylish cable knit sweater tucked under red suspenders, and heavy newsboy cap with ear flaps pulled snugly over tousled blond hair. Ancient wooden touring skis, polished to a luster, were stuck into the deeper snow just off the trail. With his boyish good looks, he could have stepped right out of a photo shoot for a fashion mag or perhaps an ad for LLBean. It flashed into my mind that I'd crossed a time warp and was back in the late 1800's. But the spell was broken when he smiled broadly and asked if I knew the trail. Could I tell him where he was headed? I thought perhaps he was going for an overnight at Francies Cabin, a back country hut that's accessed from the trail we were traveling. But, no - he was just heading into the wilderness. Would he pitch a tent or build a snow cave to spend the night? I didn't ask, but as I waved goodbye my mind was already making up stories about who he was, where he'd acquired his dated gear, why he was alone on the trail, and what his fate would be. A meeting of a few minutes can entertain me for days. 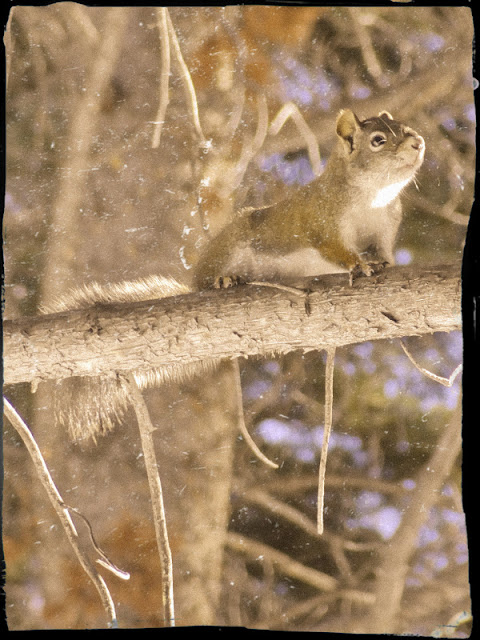 ghost traveler
will I see you again
shouldering your pack
gliding effortlessly into wilderness
perhaps returning to that long ago time
from whence you came
I wish you safe journey
Spreading the Love Challenge
Posted by Barb at 12:00 PM

Email ThisBlogThis!Share to TwitterShare to FacebookShare to Pinterest
Labels: Spreading the Love Challenge

Barb - Always Clicking
I live at high altitude in Breckenridge, CO. I invite you to join me as I experience and share One Good Thing. Though I'm in my late 70's, I try to stay young at heart, to welcome new experiences, and to keep active by hiking, snowshoeing, skiing, and walking. I'm a quiet soul, a good listener, and a lover of Nature. My husband and I have been married for 55 years. Our Grandchildren are among our greatest joys.


Simply give others a bit of yourself:
a thoughtful act,
a helpful idea,
a word of appreciation,
a lift over a rough spot,
a sense of understanding,
a timely suggestion.
You take something out of your mind,
garnished in kindness out of your heart,
and put it into the other person's mind and heart.
- Charles H. Burr